In short - EVE could dramatically benefit from a easily joined closed PVP environment, like League of Legends, Defense of the Ancients, Starcraft II etc.

So let's start from the beginning, unless you've been really hiding from modern day gaming, you have at least heard about games like LOL and DOTA2.

These are what is called in the industry as "MOBA" games.  Multiplayer Online Battle Areas.  I would wager their most recognizable early implementation was World of Warcraft III's multiplayer , which is where the mod (now a full game) Defense of the Ancients started.

Using Twitch as an indicator, you can see that on a Friday afternoon they are EXTREMELY popular.  There are 300k viewers of other people playing these games according to Twitch. 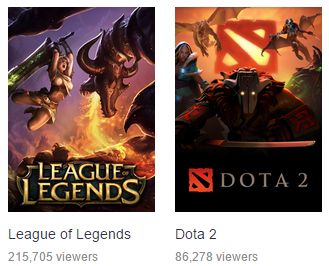 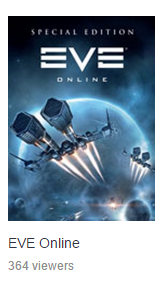 Instant Gratification
EVE is missing a large portion of that player base for many reasons, perhaps way too in-depth to go into during this blog post, but one key feature is the lack of "instant gratification" found in these other games.  In LOL or DOTA you can load up and get into a match within a few minutes (depending on server load and finding good teammates who dont disconnect on you).

Sure, we have faction war and Red vs Blue to satisfy some of the desire to get into "instant" fights.  Judging by their popularity and how popular LOL / DOTA are I think that adding a MOBA system into the client would be a huge addition.

Design a Ladder System
If you have to, just start ripping ideas from LOL or DOTA.  Here's a wiki on the LOL Ladder System and I am certaintly no expert on MOBA's, but gather some smart people and design something that makes sense for EVE and these types of matches. 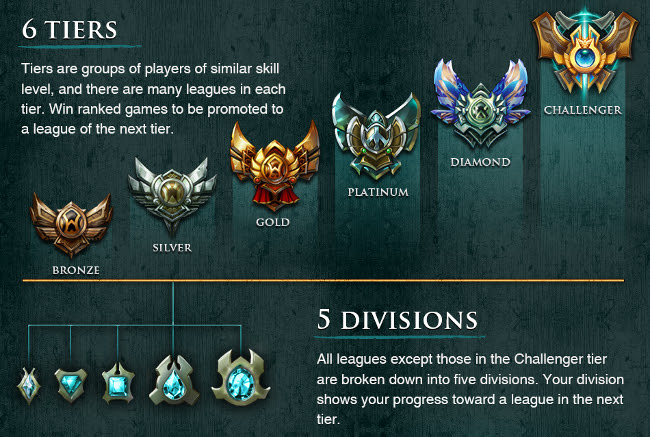 Designing ladders based on ship classes seems like a good idea (Frigates, Cruisers, Battleships etc) or have an open system based off points like the EVE Tournaments.  There is a specific list of rules already formulated for the EVE Tournament, so start there as a base line.

I think ranking players based on Skill Points would be a good idea to an extent, but above a certain SP level people should be fairly even in that particular ship class.

The Alliance Tournament was very popular with the players, lets tap into that.

However what I propose is something that is accessible everyday, at any time and allows players to engage in a 2v2, 5v5 or 10v10.  Those amount of players seem to be the most popular in similar battles, but the World of Warcraft MMO has battlegrounds that can have 40 players per side.  WOW players can do battlegrounds, play the "regular" game or do both. 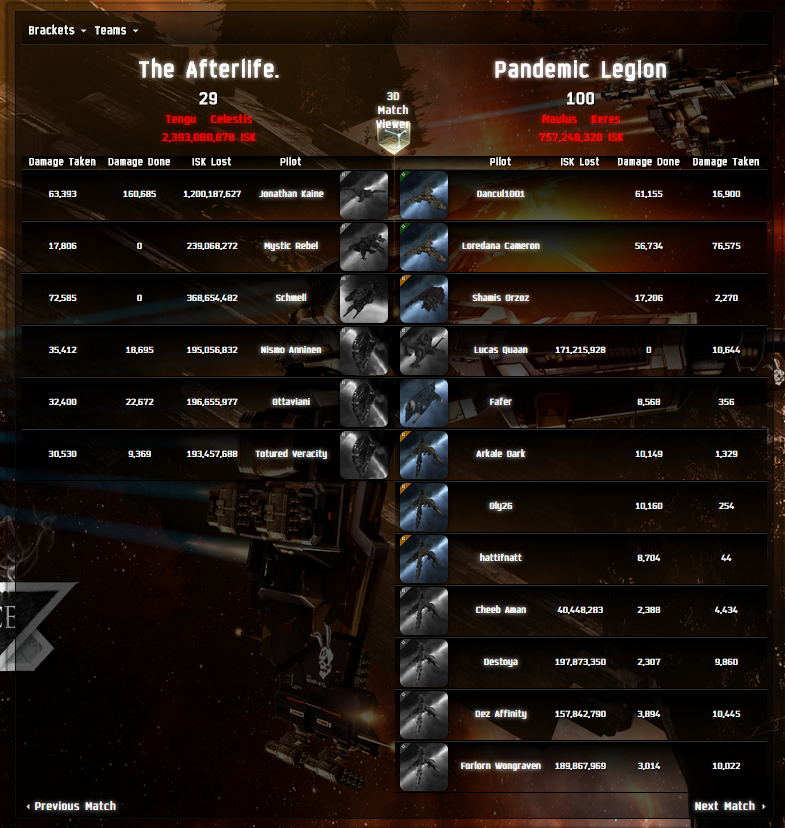 Afterlife vs Pandemic Legion, My favorite match of all time!

Economics
I would propose that if a MOBA style gameplay was implemented that in the beginning the Arena would be free to enter and free to fly ships (no ISK cost) as CCP judges issues such as server load, popularity etc.

Eventually I would advocate players having to buy ships and modules directly on the market, setting up these Arenas in either the market hubs (Jita, Amarr etc.) or in other high sec areas if server load becomes an issue.

Instanced fighting (avoiding outside interference)
It would probably be best that these fights are "instanced' where you sign up to a match and then are loaded into an Arena.  This would allow people who are under war-dec to still partake in these matches and prevent nefarious people from ganking those people running matches.

Before people start raising pitchforks on having instanced matches, remember this is exactly how the alliance tournament runs where outside interference is not allowed.

Let me be clear, these match players should have to interact with the general EVE universe.  How that should specifically be played out is something I am not sure about.  Earning ISK is an easy answer, but perhaps there are some other ideas out there to have the MOBA system be directly tied into other endeavors in EVE.

Team Fortress 2 has hats, Counter-strike has special items... knives etc.  What, if any rewards should be in an EVE Battle Arena?  I honestly have no ideas that probably couldnt be gamed.  In the beginning make the rewards purely cosmetic and then when we work on balance issues and try to find ways to avoid people screwing the system then special rewards could be implemented.

Very special care would have to be considered before adding rewards to these Arenas.


Finding good solutions on intergration
There is i'm sure many ideas out there to integrate people who love the Arena style gameplay into the main universe. An off the cuff example is faction war instanced fights to push control back and forth for systems.

Let's be honest, we could use the new influx of players
From EVE-Offline.net we can see a large drop in current players logged into EVE Online.  CCP hasent released subscription numbers in a long time, so it's unfair to say the game has lost subscribers but it has at least lost daily players. 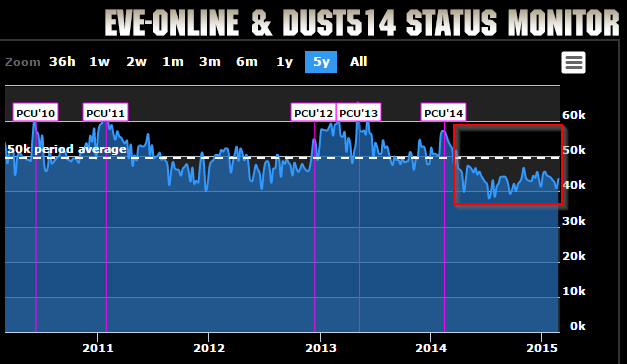 Depending on the month in question, we've lost somewhere in the range of 10-20k players from our highs in seen on the graph.

Adding Battlegrounds and/or Arenas could be a huge addition to the EVE Online experience.
Posted by Shadowandlight at 12:15 PM No comments: