The EVE Subscriber, Lost in Space? 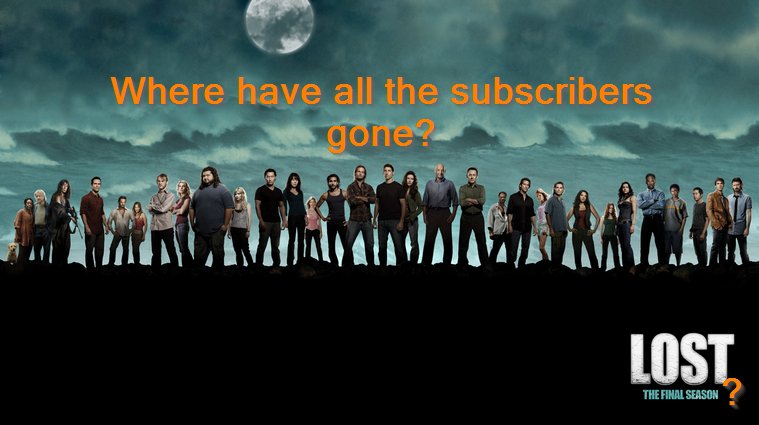 Nosy Gamer (Rosewalker in-game), Xander Phoena and I got into a heated twitter conversation on 3-30-2015 about this figure I was quoted of 146k paid subscribers in EVE along side 13k lost alt accounts since Jan 1st 2015.  Nosy then wrote a blog post from that convo.

Xander went as far as to call my commenting on the data as "Harmful' and that I was "Publicly Lambasting CCP" and "Making a bad situation worse". I don't think sharing information that I flately stated cannot be verified is "Harmful" but its obvious I touched a nerve.

Unfortunately Xander is a previous CSM 9 member but didnt make it to CSM 10, which is a bit discerning because he was at least in the community as a podcaster and member of the media with his website CrossingZebras.com. With him not making re-election and DJ Funky Bacon (from EVE-Radio) also off the CSM, we have a definite lack of Media personalities who regularly contribute to the media, but I am off topic...


I bring up Xander's CSM connection because I would be surprised if the CSM doesnt have some facts on what the actual sub numbers are, as they are shared many insider details with CCP under an NDA they sign for 5 years.


This figure of 146k came to me from a unverified source, but I found the figure at least interesting and wanted further input from CCP / EVE Players (which of course is a pipe dream, CCP stopped releasing data and the best numbers we are have are from 2012, released during their 2013 financial statements).


When I mention those figures in various media outlets (most recently the EVE-Radio TNT show with DJ Wiggles and Dirk Macgirk) I stated it was from a reported insider and also I have zero idea if the numbers are true.

I will say that I found the wording from the insider interesting. They specifically stated 146k "paid" subscribers. Does that mean pre-paid accounts paying with paypal or a debit card and not plexed?


I could easily believe that the current EVE subscribers are in the 330k range as suggested by Nosy, using previous data collected by Riptard


I never said the 146k figure was accurate, but its pretty tough to also say that using voting turnout figures is also an accurate way trying to guess subscription numbers. Trying to gauge subscriptions numbers based off voting is murky, at best.


I think the PCU daily numbers are a much better indicator of the health of the EVE universe.

The only accurate information we have is using Chribbas EVE-Offline.net which logs daily player counts (until CCP turns that off too). 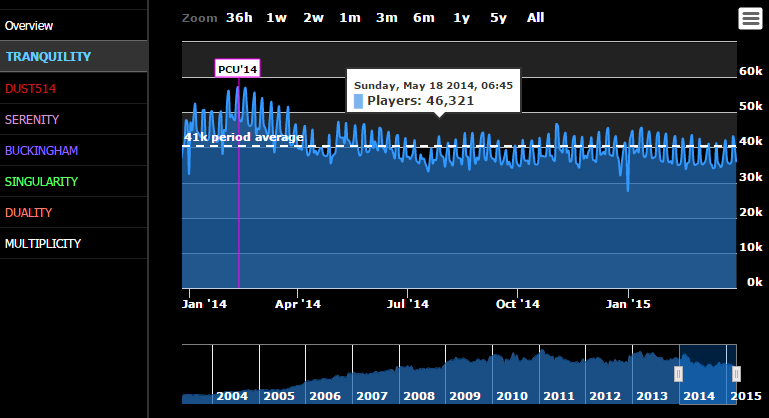 I wouldnt be shocked if the summer (notoriously bad for MMO's due to better weather and other factors) shows us running into the mid 30k's for a while.


In a year and 3 months we are seeing a drop of 9k less players on average logging in. For peak logins its much worse.

It should also be noted that all the peak login numbers are in the winter months (Roughly Sept-Feb) for the Northern Hemisphere (sorry Aussies I know thats your summer!).

There are a few ideas on things that are causing this decline starting in 2014. The biggest issue I think was the conversion of many areas in Nullsec space to rental empires, removing dozens of alliances who used to live in the West and South / South East by larger blocs who then turned the space into rentals.


A good visualization is the EVE influence map, which was turned into a pretty good video located here

Looking at the end of 2013 you will see very large regions of space owned by groups called Greater Western Co-Prosperity Sphere, Brothers of Tangra and Northern Associates. These groups are renter alliances run by very large player alliances who took over large swaths of space from other groups, then started renting the space.

It is often stated that huge parts of these rental empires go unoccupied. I dont know how many pilots were directly effected (we would probably needs some help from CCP to get that kinda data) but I would wager it had a major push on the numbers of players in 0.0 and hence perhaps on the number of people who play EVE Online. Losing your home space and then having few options other then to join your aggressor (Stockholm Syndrome) or fight for them (which a few players did) could have led a majority to just stop playing all together.


Perhaps all of this has led in part to the upcoming Sov 5.0 revamp and the Phoebe jump changes (which have already been released). If you give more players a chance to own space in 0.0, perhaps these lost subscribers will decide to come back and re-plant their flag back on the map.

I would also like to show that Dust514 is probably on life support. 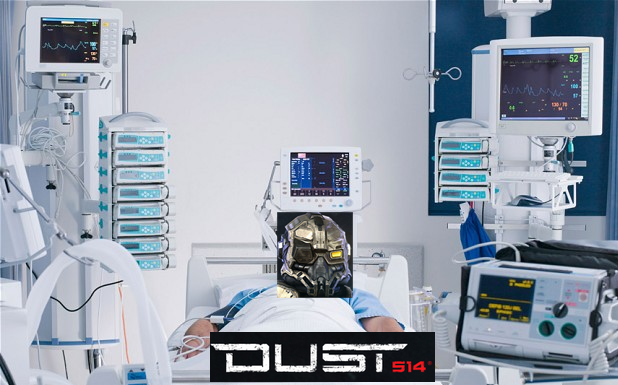 During a recent Interview it was revealed that the long desired Dust 514 port over to a PC game (called Project Legion) was in (my words) development limbo, which might be code words for "never going to happen" (in my opinion).

CCP has stated they are working on Dust 514 1st and, reading into the comments, might still bring Project Legion to PC.  Dust has received updates in the past few months, but player count still keeps falling. Dust 514 seems to be majorily suffering in the player base department.

Chribba's amazing website, Eve-Offline.net shows us that Dust started in the 9k daily logins back in 2013, but today is hovering in the 2.5k - 3k range.  While CCP stated that Dust 514 is still profitable (how?) I cant see this steadily decline boding well for the EVE Online FPS. 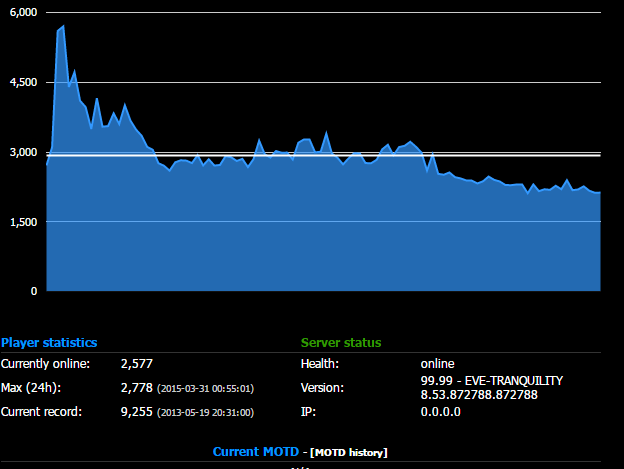 Posted by Shadowandlight at 2:10 PM No comments: 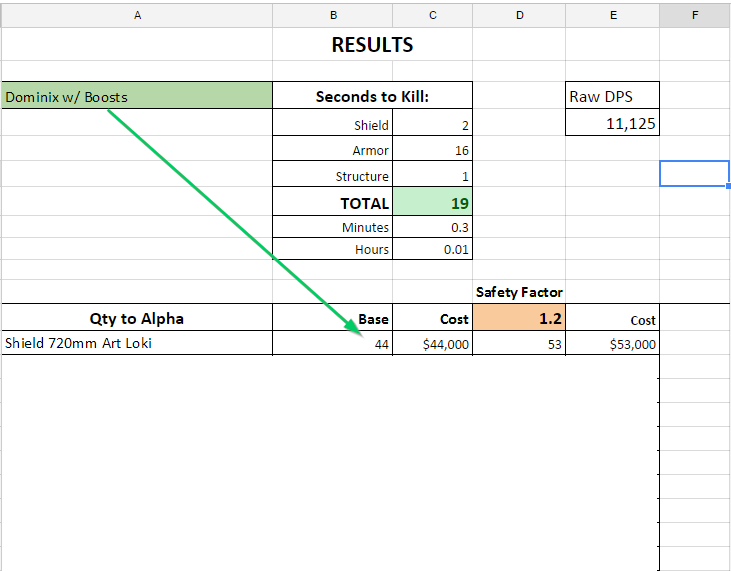 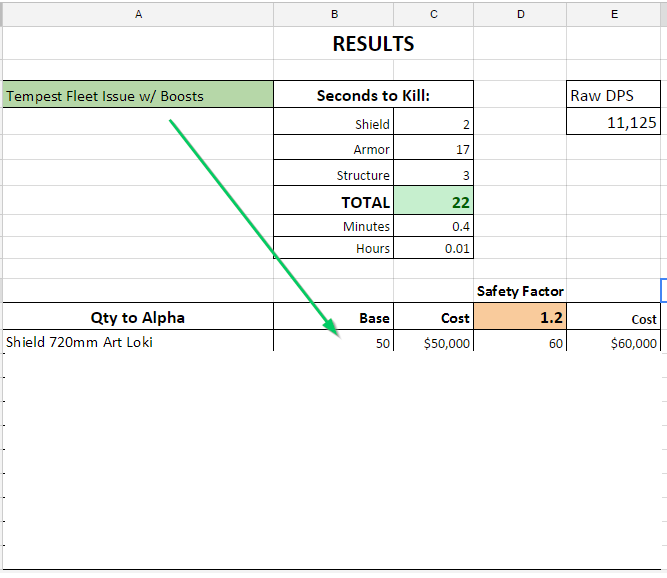 Using Garde II's, the Dominix has a higher DPS but a much lower Alpha

Assuming the enemy Loki's are moving in an orbit (hardest to hit)
&
We have 1 web and 1 target painter on the target loki
The Dominix will do 2000 Alpha vs the TFI doing 4,800 Alpha
in the WORST case scenario 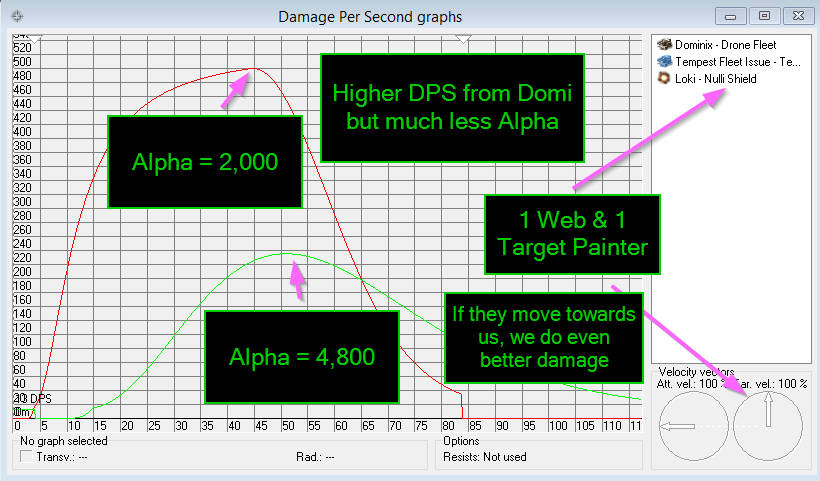 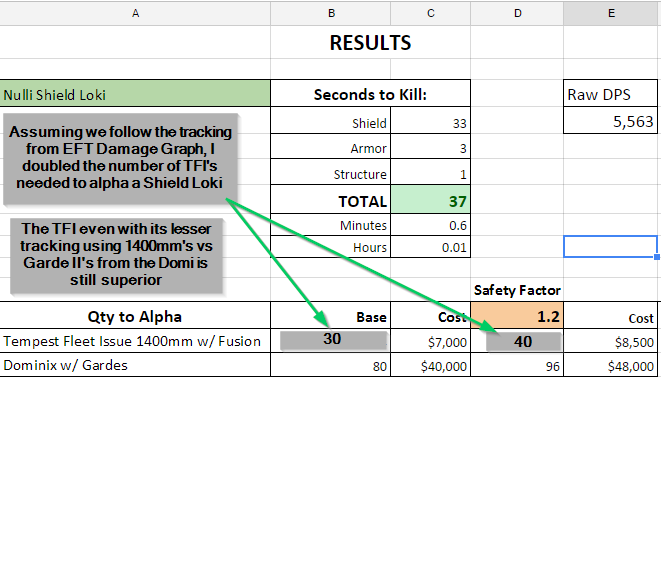 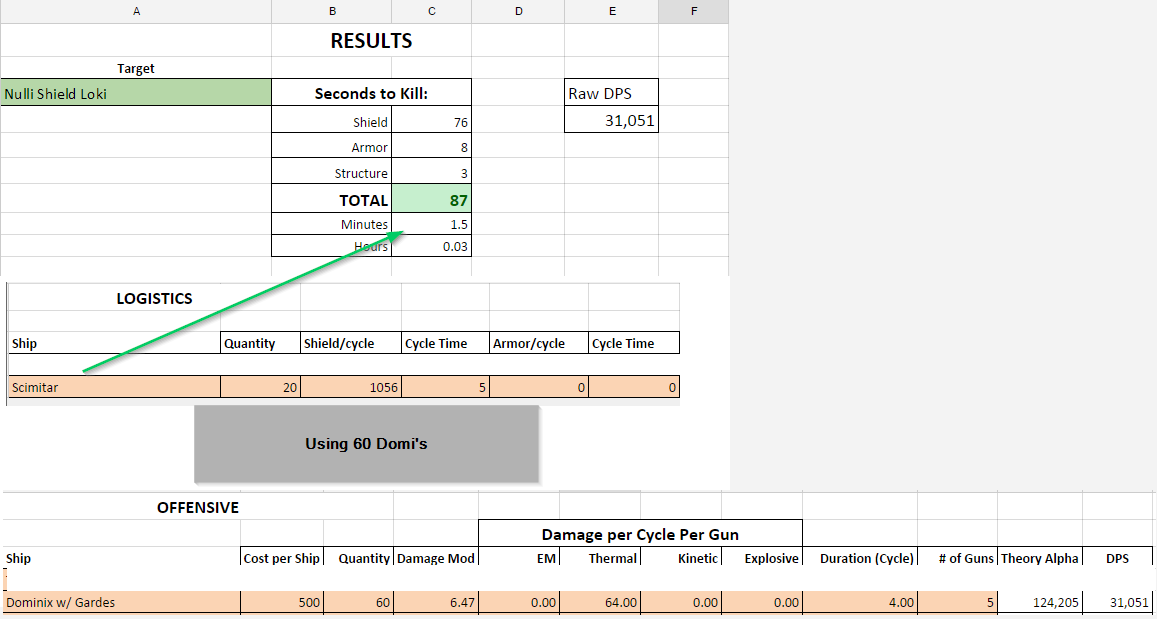 Posted by Shadowandlight at 2:26 PM No comments: