CCP - To encourage streaming you need to create some features to help out...

An example would be a video feed out to OBS or Stream that blocks a lot of the information on the screen (system location, overview etc)

its clunky and not user friendly for people to try and create overlays which ends up blocking 2/3's of the stream. 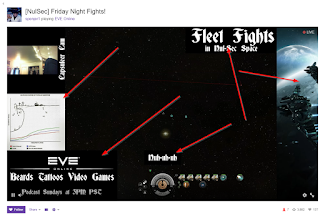 The example from Twitch streamer http://www.twitch.tv/spenjer1 isnt him wanting to add a bunch of cool stuff to his stream, its him blocking key information from nefarious people who might be watching...

Instead provide some features so that streamers can be in real time but lower their risk of getting ganked.

It's not a perfect fix (locator agents for example are a problem for streamers) but it would really raise the bar.
Posted by Shadowandlight at 10:09 PM